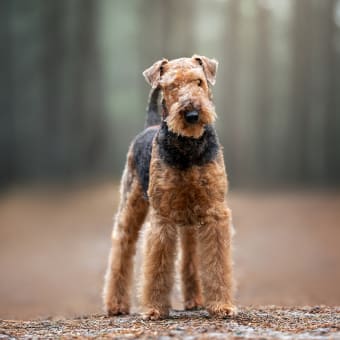 Cerebellar Abiotrophy (degeneration) and Cerebellar Hypoplasia are two serious conditions that can affect your dog's brain, resulting in a loss of coordination and balance. In today's post our veterinary neurology team explains more about these neurological diseases in dogs.

In order for you to gain a better understand of these neurological conditions in dogs, you will need to understand a few basic definitions:

Because the cerebellum controls voluntary intentional movements, any condition that damages the cerebellum can produce symptoms of ataxia (loss of full control of body movements). If your pup is displaying symptoms of cerebellar ataxia, diagnostic testing is recommended so that the underlying cause of your dog's symptoms can be determined. Conditions other than Cerebellar Hypoplasia and Cerebellar Degeneration, that can produce symptoms of cerebellar ataxia include brain tumors, infections, or congenital malformations.

Early diagnosis and treatment are important since many of the conditions which can lead to ataxia symptoms in dogs can be treated.

Vets will initially rely on a complete review of clinical signs combined with a knowledge of the breed, to deliver a suspected cerebellar ataxia diagnosis.

Although the symptoms of Cerebellar Hypoplasia and Cerebellar Abiotrophy are much the same, there are some important differences between these two neurological conditions, and the outcomes may be very different.

Some of the most common symptoms of both Cerebellar Hypoplasia and Degeneration include:

Cerebellar Hypoplasia is the inadequate development of the cerebellum in puppies. An underdeveloped cerebellum will mean that the pup will be unable to move or stand normally.

Prognosis for Dogs with Cerebellar Hypoplasia

Treatment for Cerebellar Hypoplasia in Dogs

Cerebellar Abiotrophy in dogs is an inherited degenerative disease which causes the cells of the pet's cerebellum to gradually die off. Cerebellar Degeneration in dogs leads to a loss of balance, posture and coordination which typically becomes more severe over time.

Cerebellar Degeneration is typically a breed specific disease with symptoms appearing in different breeds at different stages in the lifecycle, and showing different rates of progression from one breed to another.

Progression of Cerebellar Degeneration in Dogs

Note: The advice provided in this post is intended for informational purposes and does not constitute medical advice regarding pets. For an accurate diagnosis of your pet's condition, please make an appointment with your vet.

If your primary care veterinarian believes that your pup is suffering from Cerebellar Hypoplasia or Degeneration ask your vet about a referral to our Veterinary Neurology team at Carolina Veterinary Specialists in Winston-Salem. Our board-certified Veterinary Neurologist specializes in diagnosing and treating disorders of the brain, nerves, spinal cord, and muscles in dogs and cats.